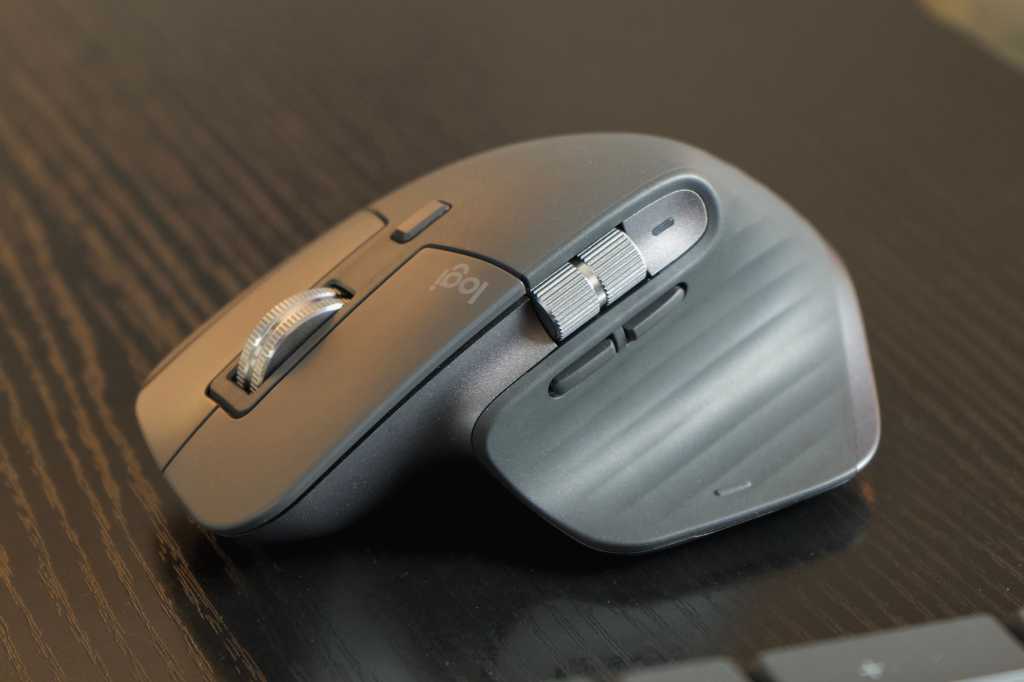 The best Mac mouse is updated with a delightfully quiet clicking action and a higher-resolution sensor that’s great for 4K and 5K displays.

Since its debut about two years ago, we have considered Logitech’s MX Master 3 to be the best overall Mac mouse for productivity.

Now it has been updated to the MX Master 3S, and the improvements, though minor, are enough for it to hold on to the top spot. The MX Master 3S is virtually identical to the MX Master 3 but features an improved 8000dpi sensor and quiet-click buttons. There’s a new Options+ app as well, though that will work with a lot of Logitech mice, including older models.

A comfortable design (for right-handed users)

Logitech’s design for the MX Master 3S is identical to the MX Master 3. It’s got a nice sculpted shape that fits well in the hand, with a gentle left-to-right slope and a thumb rest for a more comfortable resting position.

There are still two primary buttons, which are now incredibly quiet. They still have a nice clicky feel, not mushy at all as some quiet-click mice are, but they make almost no sound. Your coworkers will thank you.

Between the left and right buttons is a metallic knurled scroll/click wheel, with a toggle button to switch it from smooth scrolling to a ratcheted feel. I prefer the ratcheted mode, and if you scroll really fast it’s as if a clutch releases that allows the wheel to spin freely for a few seconds, with some flyweel-like inertia. It’s a great way to scroll down really long documents or web pages quickly while preserving that line-by-line precision when moving slowly.

Above the thumb rest, you’ll find another scroll wheel of sorts, made for left/right scrolling in spreadsheets or the like, along with two more mouse buttons. The thumb rest itself can be pressed downward, toward your desk, as another programmable mouse click. By default, it is set to gestures—click down and drag the mouse up, down, left, or right to perform one of several gestures, as you would do with a touchpad.

I found the thumb-rest button a bit tricky to click, but it seems to be something you’re meant to use sporadically, and it’s nice to have an alternative to all those two- and three-finger trackpad gestures when you jump from a trackpad to a mouse.

The mouse is wireless only, using either Bluetooth or the Logi Bolt USB dongle (which is included). The Bolt adapter is used for lots of Logitech wireless products—in fact, a single adapter can be paired with up to 6 simultaneously. What’s more, the mouse can be paired with three different devices (Bolt or Bluetooth), and you can flip between them with a small switch on the underside. It’s handy for those who want to use their mouse with multiple computers; Mac or Windows/Linux PC.

Battery life is claimed to be 70 hours and is recharged via a USB-C port in the front of the mouse. In my experience, that battery life estimate is reasonably accurate. In five days of on-and-off use, my mouse battery has only dropped to 90 percent. Plus you can use the mouse while it charges without issue (I’m looking at you, Apple Magic Mouse).

Improvements over the MX Master 3

With the exception of the nearly silent buttons, all the features of the MX Master 3S are more or less identical to those of the MX Master 3. There’s one other minor improvement: the optical sensor, which does a great job of tracking across all kinds of surfaces, has doubled to 8000dpi from 4000dpi.

That will be a welcome switch for those who use multiple 4K or 5K monitors. Moving around all those pixels can mean dragging your mouse all over the desk, or picking it up and moving it often, and the high-res sensor really cuts down on the mouse travel necessary.

To go along with the launch of the MX Master 3S and new MX Mechanical keyboard, Logitech has a new Logi Options+ software to replace the old Logi Options software.

It’s primarily a facelift, with the same broad-stroke features as before: choose mouse buttons and reassign their functions, even choosing OS features or specific shortcuts or keystrokes. There are global settings and you can assign new settings and button assignments per application.

Your options are saved to the cloud (with a Logitech account) and follow you to other systems you use Options+ on. It also enables a feature called Flow that lets you move control from one computer to another just by moving the mouse off the edge of the screen (assuming your devices are paired to both and have Options+ installed on both). You can even copy and paste between machines at the speed of your local network.

It works well enough, and I was even able to move easily between my iMac and Windows 11 PC. Thankfully, Options+ is a Universal app (good news for M1 Mac users), while the old Options app is Intel-only and runs under Rosetta emulation.

But it’s not without faults. For starters, it only supports specific Logitech productivity gear, while Logitech gaming gear, Blue microphones, and webcams use the similar-but-a-little-different Logitech G Hub. I shouldn’t have to run Options+ for my mouse and keyboard and G Hub for my webcam and Blue Yeti, but that’s how it is.

What’s more, there are features available in G Hub that seem arbitrarily missing from Options+, such as the ability to create multi-step macros. This isn’t just a gamer feature—programmers would probably love that option, but you can’t get it without buying a Logitech gaming peripheral to use G Hub (or relying on third-party mouse or keyboard macro software).

Logitech does say that Options+ will get features and support that Options never had. We can only hope that control over webcams and Blue microphones, as well as full macro control, are high on the list.

Should you buy a MX Master 3S?

The MX Master 3S isn’t much of an upgrade over the MX Master 3, but it doesn’t need to be. Logitech has taken what we still think is the best all-around mouse for Mac users and made it even better with a higher-resolution sensor and awesome quiet-click buttons that still feel great.

The new Options+ software is a nice facelift, and while we wish it would do more, it’s some of the best first-party mouse and keyboard control software around. If you often use more than one computer, you’ll especially appreciate how easy it is to use the MX Master 3S with up to three machines.