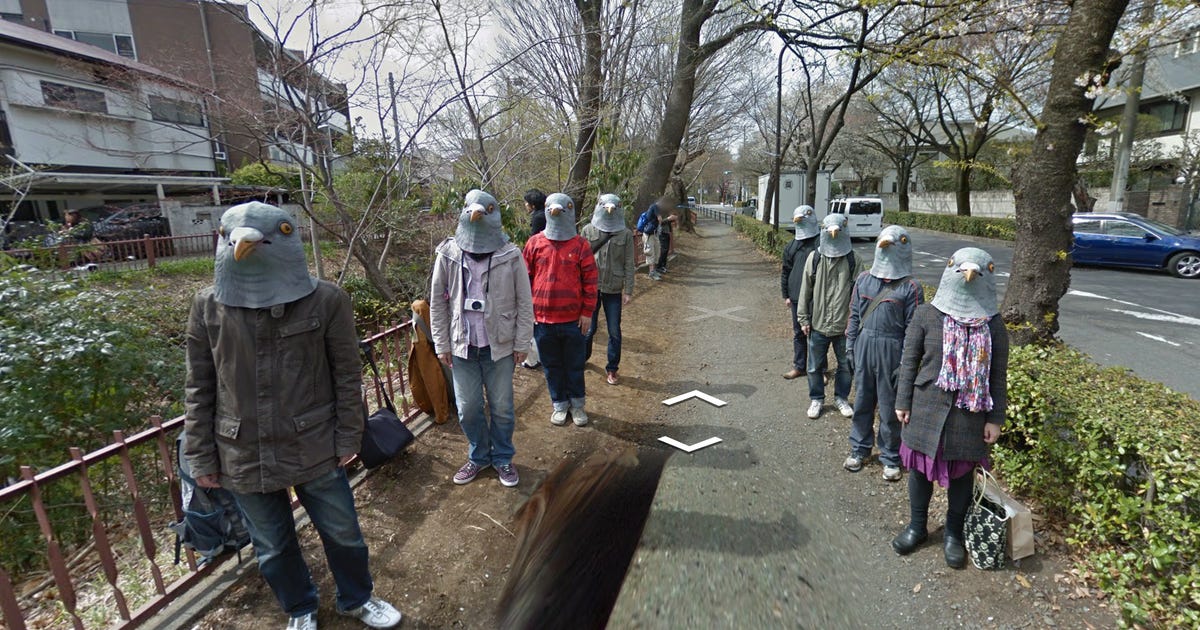 Once upon a time, someone in Ontario was rummaging through the backseat of a simple white car while wearing a reddish hoodie. I don’t know what he was looking for, but one day, he would become known as Tripod Man. And it’s not for the reason you think. Tripod Man earned his title not because of his photography skills but because someone who worked at Google took some pictures of him and stitched them together such that he, himself, looked like a tripod. Then they published it to the internet.

This is the chaos of Google Street View.

For engineers at Google, the goal of Street view is clear. Drive, bike, walk and sail across the world with a camera, take pictures of everything along the way and stitch them together to make a 360-degree view of various locations for us to enjoy on the internet. Camels in the way? Doesn’t matter. Waterslides are the only means of travel? Someone’s going in. Panoramic images not lining up perfectly? Tripod Man.

There’s even a 360 of the International Space Station on “Street” View — on this corner of the internet, the sky is, in fact, not the limit. And now, Neal Agarwal, a developer better known by his online persona neal.fun, has taken the messy beauty of Google Street View and turned it into a clever online program that will simply eat hours of your time.

It’s called Wonders of Street View, and at the click of a button, this site will bring you to hundreds of serendipitously creepy, spectacular, artistic, strange and mind-blowing byproducts of Google’s revolutionary mapping system. Arguably the best parts.

“I spent a few weeks compiling a list of weird and interesting locations from articles and listicles, and then I tried to find them on Google Street View,” Agarwal told me. “Other people have also shared weird spots and anomalies they’ve found on street view over the years, and so I tried to find those and include them too. I think I’ve spent dozens of hours on street view in the past month.”

I mean, while flipping through, I managed to catch a glimpse of an abandoned mining town in Montana that seriously resembles one of the towns in Red Dead Redemption II. In Kenya, I saw an adorable crew of elephants taking shade under a tree while Google’s Street View camera passed by.

Dragging your view down in the sandy dunes of Abu Dhabi will show you that the tech giant was so dedicated to the bit that it propped some cameras on a camel’s back to capture the full glory of the UAE. In Finland, there appears to be a field of colorfully garbed scarecrows fit for both a Disney movie and a nightmare.

“I think street view represents our dream of wanting to travel the world from the comfort of our home,” Agarwal said. “I remember spending hours on street view as a teenager exploring different countries and learning so much. I wanted the site to give a similar feeling to StumbleUpon, where it feels like you’re just stumbling on cool places in the world.”

If you aren’t familiar with StumbleUpon, several years ago it was considered something of a cure for boredom. All you had to do was go to the StumbleUpon website, click a button and a cool corner of the internet would show up on your screen. There were unique games, research articles and random sites that changed colors when you pressed different arrow keys. It was just the kind of place where programs such as Agarwal’s — including this asteroid launch simulator — might be stumbled upon.

As of now, Agarwal said Wonders of Street View has about 300 locations to search through. “The site embeds the views from Google Maps,” he said. “I definitely want to keep adding more street views! If anyone finds anything cool on street view, feel free to send it my way.”

When asked for his favorite location as of yet, Agarwal said that even though the most breathtaking view is one from the ISS, his number one is what’s known as The Instant Ramen Tunnel at the Cup and Noodle Museum in Japan.

“A close second,” Agarwal said, “would be Tripod Man.”