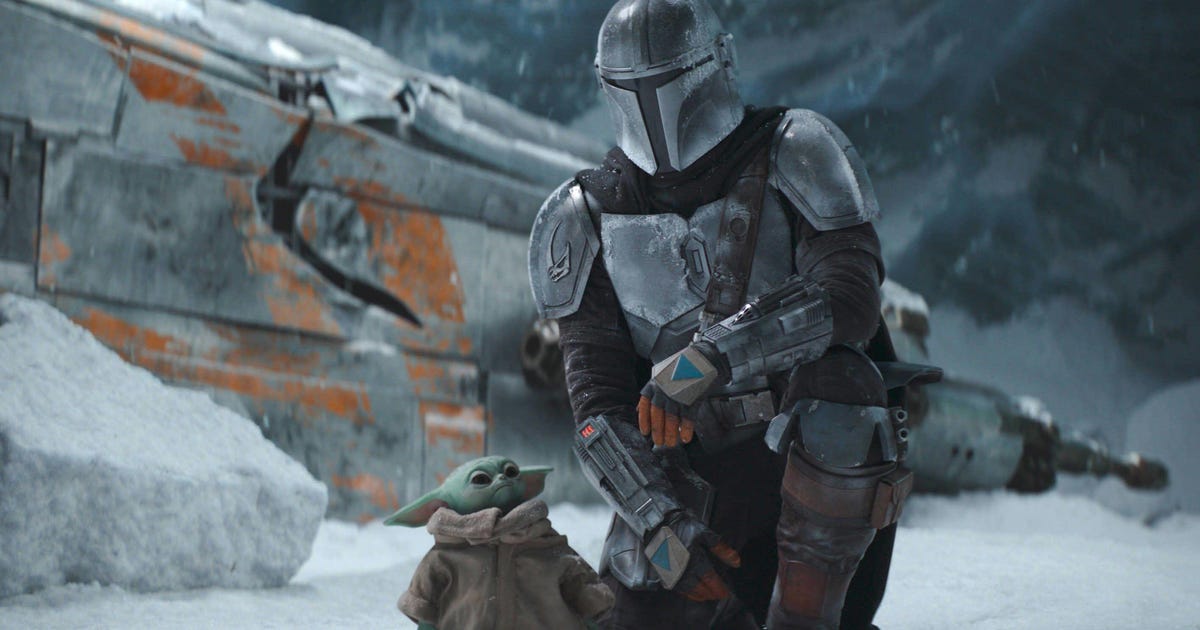 Andor brought fresh Star Wars adventures to Disney Plus until last week, but you might be wondering when Mando and Grogu (aka Baby Yoda) will return for more adventures. The Mandalorian season 3 will kick off in March 2023, and the first trailer hints at where the shiny dad/green son duo’s story will go after their show-stealing appearance in The Book of Boba Fett earlier this year.

Let’s take a look at where Mando’s adventures, which take place five years after Return of the Jedi, are likely to go next. We’ll be diving into full SPOILER territory for the first two seasons and The Book of Boba Fett, so be warned if you aren’t up to date.

Is there a Mandalorian season 3 trailer?

There sure is. The first trailer was released during Disney’s D23 Expo in early September. It’s nearly identical to the trailers shown to the crowd at Star Wars Celebration Anaheim (but not released online) in May.

When is season 3 coming to Disney Plus?

It’s scheduled to kick off on Wednesday, March 1, 2023, Disney confirmed Thursday. It’s unclear how many episodes we’ll get that day, or how long the season will last.

What else do we know about season 3?

The trailers hinted that we’ll be going to Mandalore, a world we’ve previously seen only in animated shows The Clone Wars and Rebels, along with a flashback glimpse in The Book of Boba Fett. It’s been ruined by the Empire, but Mando must return to the planet to atone for removing his helmet.

Grogu is along for the ride, and still ridiculously cute. Former Mandalorian leader Bo-Katan Kryze has a regal moment sitting on a throne similar to the one in Mandalorian capital Sundari. (This room features prominently in the final episodes of The Clone Wars.) Mando allies the Armorer and Greef Karga will also return.

Action sequences included massive Imperial Star Destroyers and suggested that Mando will lead some of his fellow Mandalorians into battle.

The second season ended with Luke Skywalker taking Grogu for Jedi training and a post-credits scene teasing Boba Fett’s show. It initially seemed like the bounty hunter’s solo show would tell a completely separate story. However, the narrative shifted to Mando and Grogu in the last few episodes — the pair reunited after the little guy rejected Luke’s training and returned to his armored space dad.

During season 2, Mando (real name Din Djarin) also ran into another group of Mandalorians, led by Bo-Katan. She was on a mission to retake their home-world Mandalore and get the Darksaber (a Mandalorian symbol of leadership) back from Moff Gideon. In the season finale, Mando took possession of the Darksaber and inadvertently became the leader of the Mandalorians.

It seems likely that he’ll join Bo-Katan’s mission to some degree, but the Darksaber will remain a source of tension.

We also found out that Mando isn’t a typical Mandalorian. Bo-Katan revealed that he’s a Child of the Watch, a “cult of religious zealots that broke away from Mandalorian society.” That’s why he isn’t supposed to remove his helmet and reveal his face to anyone. But he gradually became more open to showing his face during the first two seasons, and admitting that to his fellow Children of the Watch — led by the Armorer — got him kicked out of the group.

Beloved Back to the Future actor Christopher Lloyd will also show up in a guest role (which likely means he’ll be in one or two episodes), according to The Hollywood Reporter.

What’s the deal with Boba Fett?

The closing shot of season 2’s first episode revealed a mysterious man (Temuera Morrison) watching Mando from afar. He appears to be wearing Tusken Raider gear, and then he turns around, revealing the face of Boba Fett — the bounty hunter who fell into the sarlacc pit in Return of the Jedi.

The Mandalorian armor that Cobb Vanth (Timothy Olyphant) was wearing in the episode was Boba’s, and he tracked Mando until he could reclaim it in the season’s sixth episode.

After helping Mando rescue Grogu from the Imperial Remnant in the season finale, a post-credits scene revealed Boba’s next move: seizing power in Tatooine’s criminal underworld, leading directly into spinoff show The Book of Boba Fett.

Morrison played bounty hunter Jango Fett in Attack of the Clones and also portrayed the clone troopers in that movie and Revenge of the Sith. Jango was recruited by Count Dooku to serve as the genetic template for the clone army used by the Galactic Republic, as part of Darth Sidious’ convoluted plot to wipe out the Jedi. Part of Jango’s payment was an unaltered clone that he could raise as his son — Boba — but the elder Fett was killed during the Battle of Geonosis.

The younger Fett was played by Daniel Logan in Attack of the Clones and The Clone Wars, but The Mandalorian takes place decades later, and a grown-up Boba would look identical to Jango.

However, Boba isn’t the only person with Jango’s face. Even though clone troopers were designed to age at an accelerated speed, some could still be alive. The Rebels series finale revealed that Commander Rex fought in Return of the Jedi’s Battle of Endor (a few years prior to the events of The Mandalorian), while Commander Wolffe survived until at least the end of Rebels (which took place years before A New Hope).

We saw a mysterious person approach assassin Fennec Shand’s body on Tatooine in the final moments of the fifth episode of season 1, with Fett’s trademark spur sound effect, and the sixth episode of season 2 revealed that it was indeed Boba. He saved her life, and she teamed up with him to repay the favor. She also joined him in The Book of Boba Fett.

Fans of the Legends material (developed in novels, comics and games prior to 2014) will recall that Boba escaped the sarlacc in that continuity and went on to become the leader of Mandalore in a very different (and noncanon) post-Return of the Jedi galaxy.

Ahsoka Tano, the former Padawan of the late Anakin Skywalker and star of CGI animated series The Clone Wars, made her live-action debut in season 2. She’s played by Rosario Dawson, whom you might remember playing Claire Temple in Netflix’s Marvel shows.

Her spinoff series, Ahsoka, is coming to Disney Plus and will probably see her hunting for Grand Admiral Thrawn as it continues the story of animated series Rebels (which is set years before The Mandalorian). The Imperial villain was last seen in the Rebels finale, but we don’t know why Ahsoka is after him. This show is scheduled for release in 2023, and its events will likely tie directly into future Mandalorian plotlines.

There was also Rangers of the New Republic, which fans initially speculated would feature Marshal Cara Dune, but that show isn’t going to happen. In February 2021, Lucasfilm said that Gina Carano, who played Cara in the first two seasons, would no longer be in The Mandalorian or future Star Wars projects.

In May 2021, Variety reported that the show was “not currently in active development,” and Lucasfilm President Kathleen Kennedy later told Empire Magazine that elements from it would likely be used in The Mandalorian instead.

What about Baby Yoda?

This little guy captured everyone’s heart the moment he appeared in the first episode. We also learned that he was 50 years old and could use the Force, but we were well into season 2 before we learned anything else about him.

In that season’s fifth episode, Ahsoka Tano communicated with him using the Force and discovered that his real name is Grogu. He was raised in the Jedi Temple on Coruscant, before being hidden when the Empire wiped out the Jedi in Revenge of the Sith, and in the decades since, he’s suppressed his powers to stay off the bad guys’ radar.

The Imperial Remnant apparently wanted him so it can use his blood to create Force-strong beings. But it’s unclear if this is for Moff Gideon’s own ends, or if Gideon is knowingly working for the reborn Palpatine or unknowingly doing the hidden Emperor’s bidding.

Grogu went with Luke Skywalker to be trained in the ways of the Force in the season 2 finale, but he reunited with Mando in the last episode of The Book of Boba Fett.

Oh, and the most detailed version of the puppet apparently cost around $5 million.

What happened in seasons 1, 2 and The Book of Boba Fett?

You’re in luck! I wrote detailed recaps of each episode that you can use to catch up:

The Book of Boba Fett

Chapter 1: Stranger in a Strange Land

Chapter 2: The Tribes of Tatooine

Chapter 3: The Streets of Mos Espa

Chapter 5: Return of the Mandalorian

Chapter 6: From the Desert Comes a Stranger

Chapter 7: In the Name of Honor

Is there a bounty of Mandalorian merch?

Merchandise hunting is a complicated hobby, but you know you want it. Lego revealed an impressive (most impressive) 6,187-piece, $600 Razor Crest set in September. It’ll be available for Lego VIP members starting Oct. 3, and everyone else beginning Oct. 7.

Since the show’s debut in November 2019, a mountain of toys and other collectibles have been released. Highlights include Hasbro’s six-inch Black Series and Vintage Collection.

There was a steady stream for season 2 as well, like Lego’s huge Baby Yoda set, Polaroid’s Mandalorian-themed instant camera and Hasbro’s Black Series The Mandalorian and Grogu (Arvala-7) deluxe set.

Another cool item is the Force FX Elite Darksaber replica, which has a removable blade, a metallic hilt, makes excellent sound effects and comes with a lovely stand. It’ll set you back around $280.

Are there any tie-in books?

If you’re into the show’s aesthetic, Lucasfilm creative art manager Phil Szostak’s The Art of Star Wars: The Mandalorian Season One and Season Two are available now.

Marvel is also adapting the first season into an eight-issue comic series that started in July.

What’s the deal with the documentary?

Season 1 got an eight-episode Disney Plus making-of series called Disney Gallery: The Mandalorian. It includes interviews with the cast and crew, footage from the show’s production and roundtable conversations hosted by Favreau.

The second season didn’t take the episodic approach for its behind-the-scenes feature; much of the behind-the-scenes footage was all stuffed into a one-hour special instead. A special focused on the season 2 finale dropped in August 2021, revealing the digital trickery used to pull off that incredible young Luke Skywalker cameo. Director Peyton Reed also shared a photo of Mark Hamill bonding with Grogu.

Mandalorians are humans from the Outer Rim world of Mandalore, its moon Concordia and the planet Kalevala, whose story was largely told in The Clone Wars and Rebels.

Their world went through major political upheaval during the Clone Wars and early days of the Galactic Empire’s rule, but many of the clans united under the rule of Bo-Katan Kryze after she took control of the Darksaber. The black-bladed weapon was created more than 1,000 years earlier by Tarre Vizsla (the first Mandalorian to join the Jedi Order) and became a symbol of leadership.

Who’s in the show?

Pedro Pascal (best known for playing Oberyn Martell in Game of Thrones) is the bounty hunter behind the helmet: He’s a lone Mandalorian gunfighter operating in the outer reaches of the galaxy.

He’s joined by a star-studded cast, though a couple of these characters didn’t survive:

Who else is involved?

Directors for the first and second seasons include:

The Mandalorian is among the first projects for ILM TV, a division of Lucasfilm’s Industrial Light & Magic visual effects company. The show’s soundtrack is composed by Ludwig Göransson, who scored Black Panther, Venom and Creed II. Göransson’s Black Panther score won him a Grammy and an Oscar in 2019.