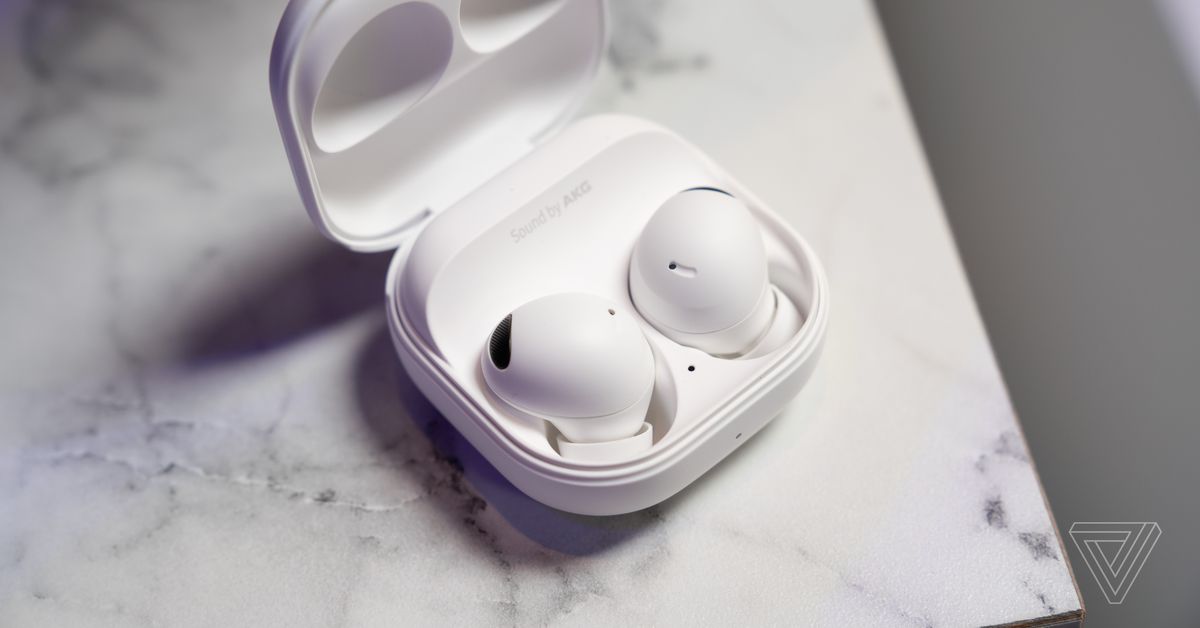 Continuing its string of iterative hardware updates today, Samsung is introducing the new Galaxy Buds 2 Pro. The company says they’re smaller and more comfortable than the original Buds Pro, and the new model supports 24-bit audio playback over Bluetooth — if you’re using a Samsung phone, that is. Preorders for the $229.99 Buds 2 Pro start today, and they’ll be available on August 26th. (That’s $30 more expensive than the launch price of the original pair.) Samsung’s latest top-of-the-line earbuds will be offered in black, white, and purple.

The Buds 2 Pro are 15 percent smaller than the original Buds Pro, and Samsung has also expanded the venting grille to allow added airflow to reach your ears and cut down on any “plugged up” feeling during extended use. Hopefully this will also make the earbuds’ transparency mode sound even more convincing.

Samsung is also highlighting just how much recycled material is going into these premium earbuds. This gets a little specific, so the best explanation is actually found in the footnotes of the company’s press release, which I’ve included below:

The Galaxy Buds 2 Pro can still automatically switch between various Samsung devices, but they unfortunately lack multipoint support — so you can’t pair them with two audio sources at the same time. The convenient feature is (finally) becoming increasingly common on earbuds, and Google recently included multipoint on its Pixel Buds Pro. So it’s disappointing to see Samsung ship a new flagship set of earbuds without it.

But on the plus side, Samsung says the Buds 2 Pro can now achieve 24-bit hi-fi audio playback. You’ll need a phone running One UI 4.0 or later, and Samsung notes that 24-bit support will vary by app — you know, since Spotify still doesn’t support it.

With the help of its proprietary “seamless codec (SSC HiFi),” Samsung is pulling off hi-fi wireless playback. “Quality music is enabled to transfer without a pause, and the new coaxial two-way speaker makes those sounds richer than ever,” the company claims. Apple is rumored to be exploring its own solutions for bringing higher-quality audio to the next AirPods Pro. Sony already has a solution with its LDAC codec, which is available on the WF-1000XM5 and LinkBuds S.

360-degree audio is also said to be “enhanced” with improved multichannel immersion. The Buds 2 Pro feature Bluetooth 5.3 and are LE Audio-ready, according to Samsung’s spec sheet.

Battery life is rated at up to five hours of playback (ANC on) or eight with it off. With the case, you get a total of 20 hours (ANC enabled) or 30 hours if you keep it off. And the Buds 2 Pro are rated IPX7 for water and sweat resistance. All in all, Samsung’s latest flagship earbuds are a modest improvement over the previous model but should still make a great companion to the company’s Galaxy phone lineup — including the new Z Fold 4 and Z Flip 4.