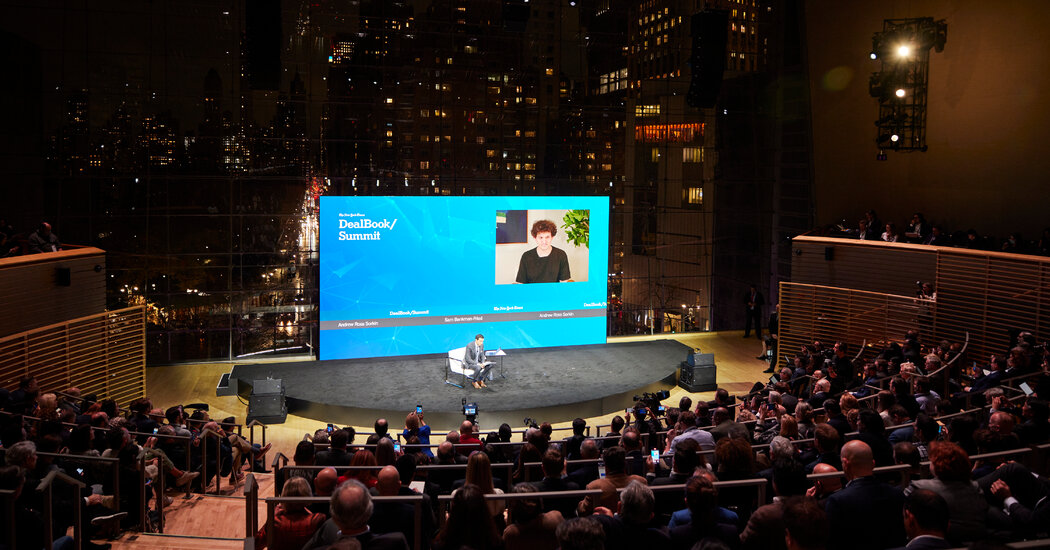 Sam Bankman-Fried, the founder of the FTX cryptocurrency exchange, made his first public appearance on Wednesday since his business empire imploded this month, insisting that he “did not ever try to commit fraud” and repeatedly saying he didn’t know the extent of what was going on within his crypto businesses.

In a live interview at The New York Times’s DealBook conference in Manhattan, Mr. Bankman-Fried blamed “huge management failures” and sloppy accounting for the collapse of his $32 billion company, which has sparked civil and criminal investigations.

Those investigations are focused on whether FTX broke the law by lending its customers’ funds to a trading firm, Alameda Research, which Mr. Bankman-Fried also owned. Speaking via a video feed from the Bahamas, where FTX was based, the 30-year-old said he didn’t “knowingly commingle funds.” At another point, he said, “I didn’t know exactly what was going on.”

Mr. Bankman-Fried also took responsibility for the collapse. “Look, I screwed up,” he said. “I was C.E.O.”

FTX disintegrated practically overnight after it was unable to meet a run on deposits that left the company with an $8 billion hole in its accounts. Within a week, the crypto exchange filed for bankruptcy.

Traders have lost billions of dollars that they stored on the platform, which served as a marketplace for crypto enthusiasts to buy and sell tokens. Companies with ties to FTX have also found themselves on shaky financial footing. On Monday, the crypto lending firm BlockFi filed for bankruptcy, blaming its links to FTX.

The Aftermath of FTX’s Downfall

The sudden collapse of the crypto exchange has left the industry stunned.

Mr. Bankman-Fried, who became a billionaire as FTX soared and was viewed as a wunderkind, faces significant legal trouble. The Justice Department and the Securities and Exchange Commission are investigating FTX’s transfer of funds to Alameda. The chief executive of Alameda, Caroline Ellison, told staff this month that the trading firm had dipped into FTX customer funds to finance its own trading activity, The Times and others have reported.

Mr. Bankman-Fried has since come under heavy criticism. In court filings, FTX’s new chief executive, who is managing the company’s bankruptcy, said he had never seen “such a complete failure of corporate control” and listed a series of “unacceptable management practices.”

On Wednesday, Treasury Secretary Janet L. Yellen called FTX’s collapse a “Lehman moment” for the cryptocurrency industry, referring to the bankruptcy of the Wall Street bank Lehman Brothers at the start of the 2008 financial crisis. She indicated that she viewed cryptocurrencies with skepticism, calling them “very risky assets” and adding that she was thankful that their recent volatility had not spilled over into the mainstream banking sector.

For someone facing possible criminal charges, Mr. Bankman-Fried has been surprisingly willing to speak publicly. As the crisis unfolded in early November, he posted a series of apologetic tweets — statements his lawyers later chastised him for making, he has said. Two days after FTX’s bankruptcy filing this month, he spoke with The Times for more than an hour about how he had managed his business empire while dodging questions about his company’s use of customer money.

On the video stream at the DealBook conference, Mr. Bankman-Fried, wearing a black T-shirt, fidgeted at times, as he often does during interviews. He said he was speaking publicly against the advice of his lawyers, who have instructed him to keep quiet and “recede into a hole.” He said he had decided to disregard their advice.

The relationship between FTX and Alameda had long been a source of criticism. Alameda traded heavily on the FTX platform, meaning it sometimes benefited when FTX’s other customers lost money, raising a conflict of interest. Mr. Bankman-Fried lived with Ms. Ellison in a penthouse in the Bahamas, and at times the two were romantically involved.

Mr. Bankman-Fried claimed he was “nervous about a conflict of interest” with Alameda, and distanced himself from its operations partly for that reason.

In addressing the impact of the company’s collapse on his own future, he was understated. “I’ve had a bad month,” he said at one point, to laughter from the audience.

Mr. Bankman-Fried also said the crisis had reduced his net worth to about $100,000. “I don’t have any hidden funds,” he said. “I put everything I had into FTX.”

FTX has also come under scrutiny for how it spent money, including a $300 million outlay on real estate in the Bahamas. At the conference, Mr. Bankman-Fried defended the spending, saying he was trying to recruit top-level talent to the Bahamas.

But he declined to speak in detail about his possible criminal liability. “There’s a time and a place for me to think about myself and my own future,” he said. “I don’t think this is it.”

The broad impact of FTX’s collapse was on display outside the conference venue, where a small group of protesters gathered; one carried a sign that said Mr. Bankman-Fried “robbed us all.”

But as Mr. Bankman-Fried spoke, an advertisement flashed at the top of a building visible behind the venue. “Buy stuff,” it said. “Get crypto rewards.”