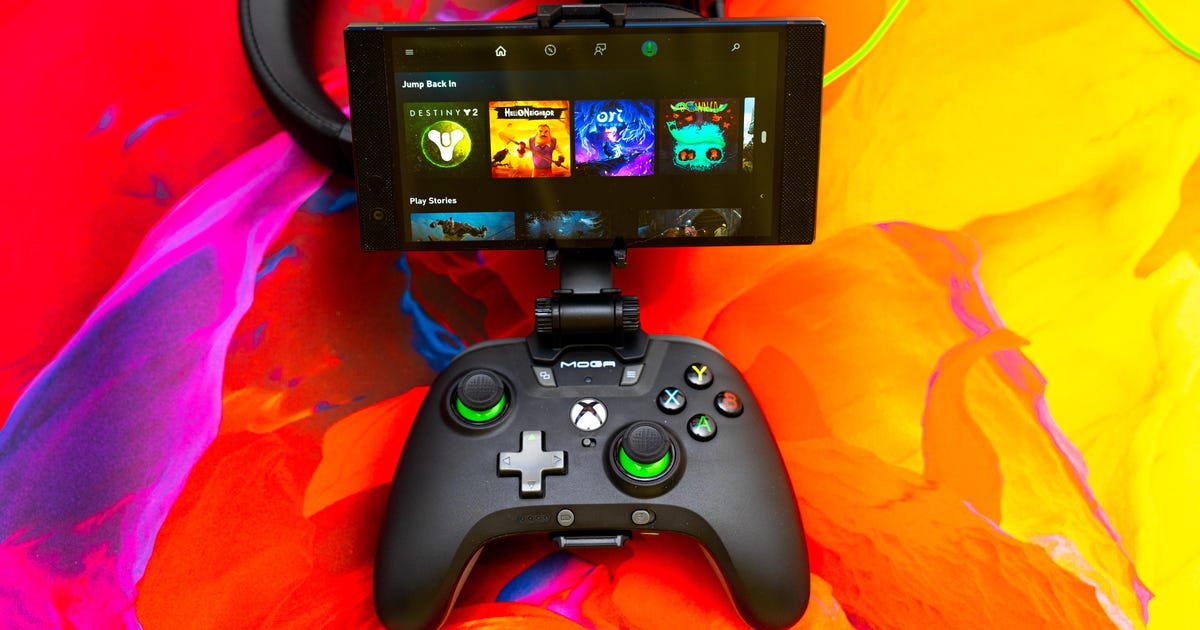 With Xbox Cloud Gaming, which has now moved on to open beta status, you can enjoy your favorite titles from pretty much anywhere. Microsoft has added support for browser-based gameplay, which means you can stream games to your Android or iPhone, iPad, PC or basically any device that can run Microsoft Edge, Google Chrome or Safari browsers. And to get the most out of this convenient service, you’ll want to make sure you have all the right controllers and accessories.

Xbox Cloud Gaming, formerly Project xCloud, lets you play a subset of Xbox Game Pass games on a device other than a console by streaming them from the cloud. It’s similar to Google Stadia and Nvidia GeForce Now. To use it, you need to be an Xbox Game Pass Ultimate subscriber, which costs $15 a month or $160 annually (with four three-month membership codes). For Windows PCs, it lets you play games your system might not otherwise have the power or space to run locally via Game Pass for PC. The latest update on the Xbox wire site says, “Xbox Insiders can now stream cloud games (Beta) to their Xbox One or Series X/S console and this cloud gaming service does not require installing.” Navigate to Xbox Game Pass games on your console and look for games with a cloud icon, then click the “play” button.

According to Microsoft, this is the official list of supported controllers, but you’ll find others that work. Microsoft says that if you’re using a web browser to play cloud games, the Xbox Wireless Controller “is currently the only officially supported controller.” However, “other controllers may or may not work for cloud gaming on a browser.”

I’ll update this list as more Xbox Cloud Gaming controllers and accessories are released, and we test additional products.

The Backbone One is my favorite of the iPhone controllers that mimic the physical experience of the Nintendo Switch, just like the Razer Kishi. But as part of the Designed for Xbox program, it’s also got specific features designed to make you feel more like you’re playing on an Xbox or standalone device. Backbone One is compatible with the Xbox app as well as the PlayStation Remote Play app.

The Backbone One gamepad uses a layout similar, though not identical, to that of Microsoft’s own Xbox controllers. But Backbone’s software is one of the keys to its success, and which makes the controller an easy update for current owners to get the new features. It’s compatible with all iPhones running iOS 13 or later.

For instance, it already has a dedicated gameplay capture button, it can tag gameplay and share as a link, incorporates a dynamic feed, and because it’s designed for use with all mobile games, can serve as a central hub for those titles.

The Backbone One will also come with one free month of Game Pass Ultimate for new subscribers (though you’re better off with Microsoft’s current offer, which nets you three months for just $1).

Unlike the Backbone One, the Razer Kishi for iPhone isn’t listed as an officially supported controller for Xbox Cloud Gaming. However, it works fine and has been selling for less than the Razer’s official Kishi Xbox iPhone controller (there are some small cosmetic differences between the two and the Xbox version includes a code for a free month of Game Pass Ultimate for new subscribers).

It stands out from typical mobile controllers thanks to its Nintendo Switch-like design, with the paddles attaching to either side of the screen. It also directly connects to the phone, in this case via Lightning, rather than using Bluetooth, which is how game controllers generally work on mobile. It also has a passthrough port for charging your iPhone while you play.

It expands wide enough to fit all iPhone models and collapses into a compact package. It’s a good controller, although I prefer the Backbone’s ergonomics, particularly for longer gaming sessions.

If you have access to Xbox Cloud Gaming, you probably have an Xbox system, which means you already have an Xbox console. Any version 2 Xbox Wireless Controller with Bluetooth will pair wirelessly to everything from iPhones to iPads to Macs. You could also go the wired route with a Mac by plugging the controller into a USB port. Microsoft does sell a controller with a USB-C cable so you can connect to the USB-C port on various devices, including USB-C-equipped Macs. (Make sure to update to the latest firmware on your Xbox controller.) This Bluetooth controller helps you stay on target with the new hybrid D-pad, textured grip on the triggers, and easily pair and switch between devices.

Microsoft says that iOS 14.5 or higher is required for play on all Apple devices.

While you’re probably better off using an Xbox controller if you have one, the PlayStation DualShock 4 Wireless Controller is compatible with Apple devices, including Macs, via Bluetooth. And what’s nice about the DualShock 4 is that unlike the Xbox Wireless controller it has a built-in rechargeable battery.

It’s on Microsoft’s list of supported XCloud controllers but note that Microsoft says that if you’re using a web browser to play cloud games, the Xbox Wireless Controller “is currently the only officially supported controller.” However, “Other controllers may or may not work for cloud gaming on a browser.” The DualShock 4 PlayStation Controller worked fine for me, though I did experience a touch of lag.

Note that the buttons are labeled differently from that of an Xbox controller so you’ll want to check how they match up before playing.

This is how you pair your DualShock 4 with Apple devices.

If you own Sony Playstation 5, Sony’s new DualSense controllers do pair via Bluetooth with iPhones, iPads, Macs and Apple TV so long as they’re running the latest versions of their operating systems (iOS 14.5, iPad OS 14.5, macOS Big Sur 11.3, tvOS 14.5 or higher.) It’s an expensive controller if you don’t own a PS5, but it worked fine for me using an iPad. Again, the buttons are labeled differently from that of an Xbox controller so just note how they match up.

It’s not cheap at $40, but OtterBox’s Mobile MagSafe Gaming Clip is a well-designed accessory for folks who want to magnetically stick their iPhone 12 or 13 onto a clip mount. I personally use a MagSafe case with this accessory to keep my phone protected. However, if you don’t have a MagSafe case, you can certainly use your MagSafe-enabled iPhone naked (the phone sticks well to the mount but it isn’t clamped in so it can fall off if you happen to drop your controller).

The clip is adjustable for various iterations of Xbox controllers, including the newest version for the Xbox Series X and the Elite controller. Using MagSafe makes it easy to get your iPhone on and off the clip mount so you can quickly take a call if need be during a gaming session.

If you’re just looking for a gaming clip to mount your iPhone on your Xbox controller, the PowerA MOGA Mobile Gaming Clip 2.0 is a good option for $15. It’s not as swank as the Otterbox MagSafe option, which has a little bit more premium look to it, but it certainly does the job.

The Razer Kishi for Xbox Android is similar to the iOS version but connects via USB-C instead of Lightning (there’s no Bluetooth) and has a pass-through port for charging while you play.

Like the iPhone version, this has a Nintendo Switch-like design, with the paddles attaching to either side of the screen. It expands wide enough to fit a variety of Android smartphones and collapses into a compact package. It can fit Android devices with center-mounted USB-C ports and dimensions of 145.3 to 163.7 mm (height) by 68.2 to 78.1 mm (width) by 7 to 8.8 mm (depth).

If you’re looking for a controller that wraps around your Android phone, the Kishi is really the only game in town (Backbone currently only makes an iOS controller). But it is a good controller and is frequently discounted to well below its $100 list price.

The PowerA MOGA XP5-X Plus includes a wireless game controller plus a clip for mounting your phone. It’s a decent controller that also features an integrated 3000-mAh battery to charge your phone as you play. It’s a little kludgy, with the cable running from the controller to your phone, but it works and is a big help during longer gaming sessions.

The controller is compatible with Android devices and Windows PCs. It’s arguably the best value when it comes to Xbox Cloud Gaming accessories for your Android phone. It’s on Microsoft’s list of officially supported gaming controllers and it looks and feels like a cheaper version of an Xbox controller.

While the SteelSeries Stratus Duo Wireless Gaming Controller isn’t on Microsoft’s list of officially supported game controllers for Android it worked fine in our tests, is ergonomically sound and has a sturdy feel to it. (The older Stratus XL is on Microsoft’s list of supported controllers). It’s also designed to work with Windows PCs, Chromebooks and certain VR devices.

One of the key reasons to get this over the Xbox Wireless Controller is that it has a built-in rechargeable battery. Alas, it uses micro-USB for charging, but that’s only a minor annoyance. We assume future versions will be updated with USB-C.

A lot of folks have a PlayStation DualShock 4 Wireless Controller lying around. It’s compatible with Android devices via Bluetooth (using it with Android devices running Android 10 or higher is preferable, Microsoft says). What’s nice about the DualShock 4 is that unlike the Xbox Wireless controller it has a built-in rechargeable battery. As noted, the buttons are labeled differently from that of an Xbox controller so just note how they match up. It worked fine for me on a Samsung Galaxy Tab S6 tablet.

This is how you pair the DualShock 4 with Android devices.

Sony’s new DualSense controllers for the PS5 also pair via Bluetooth with Android devices. Like I said in the Apple section, It’s an expensive controller to buy separately, but if you have one already you might as well give it a try. It currently isn’t on Microsoft’s list of supported controllers and the buttons aren’t labeled the same as those on a Xbox controller so just take note of how they match up before you start playing.

The PowerA MOGA XP5-X Plus is listed above, but you can also just buy the PowerA MOGA Mobile Gaming Clip 2.0 separately if you already have an Xbox wireless controller and want to mount your phone on it. I listed it as a good value clip for iPhones, but it works just as well on Android.

If you’re looking for a versatile gaming headphone that’s comfortable, performs well for its price and includes a USB-C dongle for use with Android phones (as well as the Nintendo Switch and PS5), the SteelSeries Arctis 1 is a good option. It also works with Xbox, PS4 and PC — but there’s no Bluetooth, so don’t expect to use it with Apple devices.